One fine day, a neighbor posted in our apartment Whatsapp group saying that she found a baby squirrel outside her window. Since it was crying through the night, they brought it inside and kept it in a shoe box. They have a dog and was worried if the dog will do something to the squirrel. Overcome with compassion, I brought the shoe box and the squirrel home. I thought I would try feeding it and then if it was ok, I could keep the shoe box in the garden and let the squirrel go out by itself.

A few hours after bringing the squirrel home, it started getting active, peeping from between the flaps of the shoe box and trying to come inside the house. That’s how the tiny thing looked.

I had to go out for some time, and when I came back, the squirrel was lying listless on the floor.

I started panicking. Tried calling PFA(People for Animals) and CUPA. PFA office gave me the reference of ARRC, Avian and Reptile Rehabilitation center, based out of Hormavu. I immediately took the squirrel over and found a normal house with a tall compound wall. Rang the bell outside, and filled a form to hand over the squirrel. They were very professional about the whole process.

And I learnt a good lesson. Most of the stray and abandoned animal babies are killed by well-meaning people who try to feed it. All stray animals should be handed over to professionals as soon as you can. And we should not try to force feed them.

So I left the squirrel there and came back home. Messaged them a few weeks later asking if I could come and visit. They said a sweet but firm ‘No’, but sent me a short video of the baby squirrel.

Two months later, I got a call from ARRC saying that the squirrel was ready for ‘soft release’ where they keep the squirrel in a cage in a balcony or garden. Then they leave the cage door open for a couple of days. And the squirrel would go away by itself when it becomes used to the surroundings. They asked if they could use my garden for this. I was overjoyed at being able to see the little guy again.

And so it is, that I got a big cage with not just one, but two baby squirrels in my balcony.

They were really cute. ARRC also gave me food to give them for a few days, and fancy food at that. Papaya, Kiwi, Grapes, Bananas, Green peas, Pomegranates, all cut into bite-sized pieces. Also some dry grains and seeds. I was supposed to open the cage and keep the food inside. If the squirrels came near, I was supposed to blow at them so that they moved away. Apparently, the squirrels didn’t know that they were supposed to move away when I blew at them. They merely blinked and came closer to my hand. The very first day, one of the squirrels came out of the cage when I kept the food inside.

And disappeared into the garden. The other one was more shy, more friendly, climbing onto my palm, and hanging around the balcony for a week or so. And then it disappeared too. 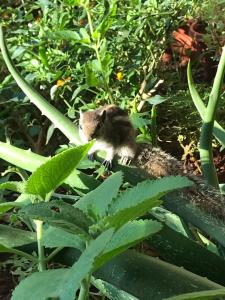 And now, when guavas and pomegranates disappear from my garden, I know who the culprits are, and I know them by name!

Once a lone capsicum grew in my garden. 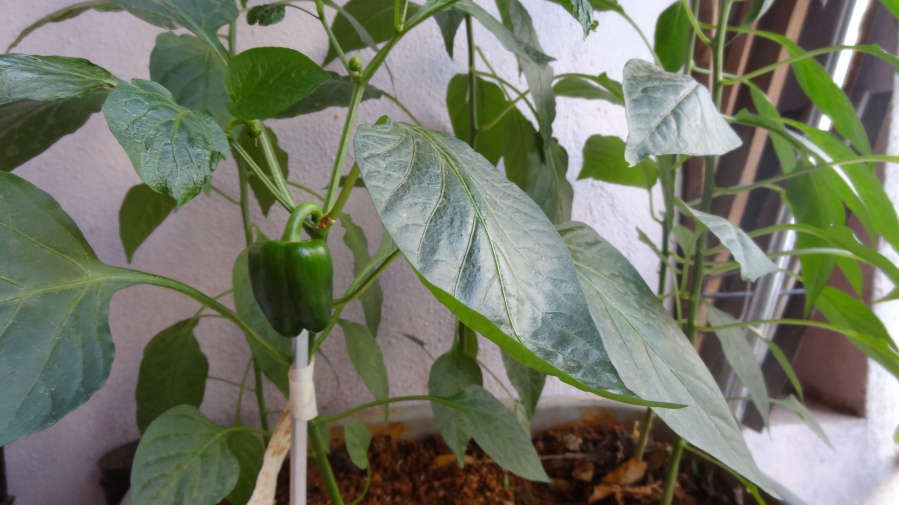 It looked pretty and perfect. And it grew.

And grew some more.

And then a small troop of monkeys came, ate the capsicum and tore up the plant. So I don’t know how home-grown capsicum tastes like.

Sorry about the tragic short story!

Unlike the tailor bird story, this is not very close to my heart. Because I am not very fond of pigeons. The dislike comes from living in apartments where pigeons are a big menace. And I have something against their personal hygiene. They poop where they sit, their nests are made of poop and they seem to revel in the messiness they can create in a short while. I have tried covering windows with nets, but the pigeons managed to come in through some hole in the net. I tried having spikes, but they made their nest inside the spikes!!

And so it is, that one day a pigeon laid two eggs in a tray my balcony. I was looking forward to seeing a small bird in the balcony, and decided not to disturb the bird. 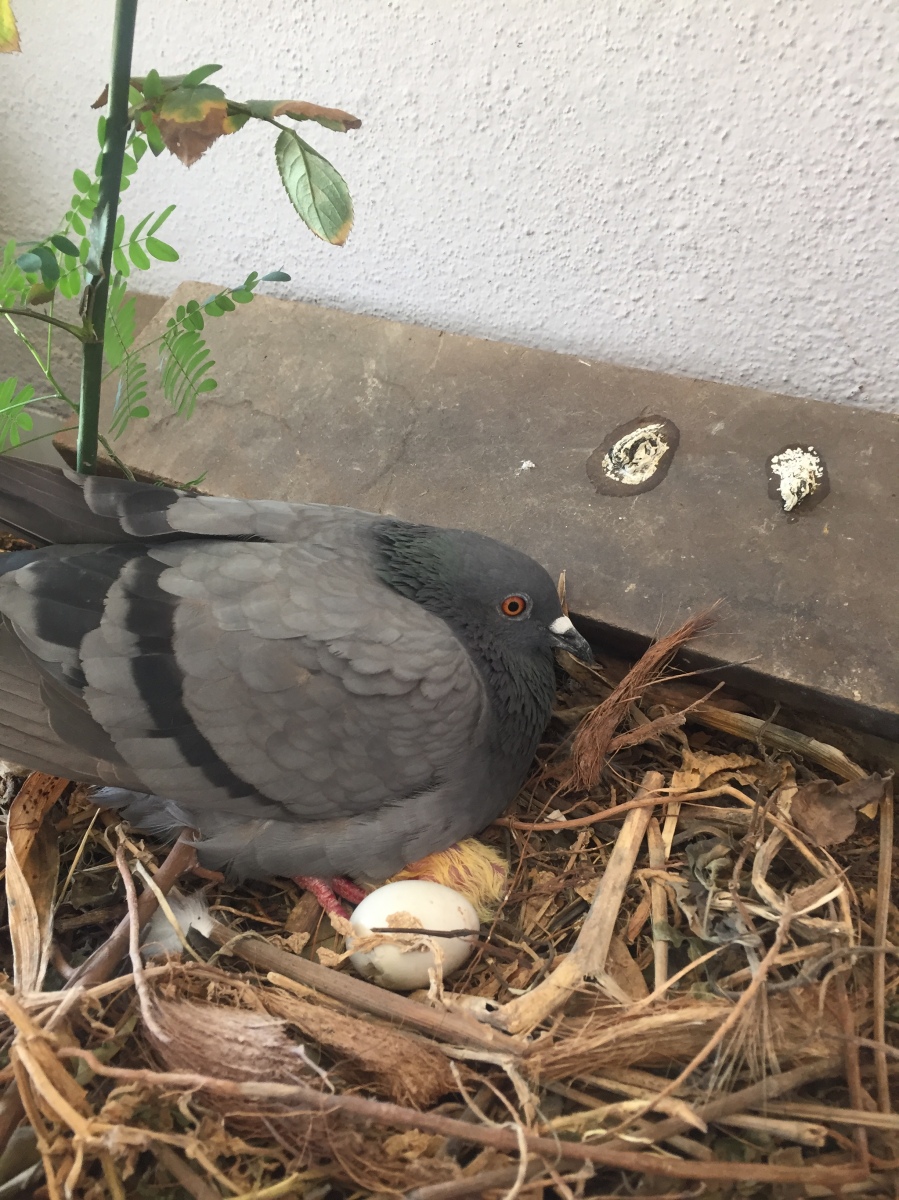 The two tiny hatchlings. Unfortunately, only one survived.

That’s one ugly, but cute at the same time, baby pigeon. 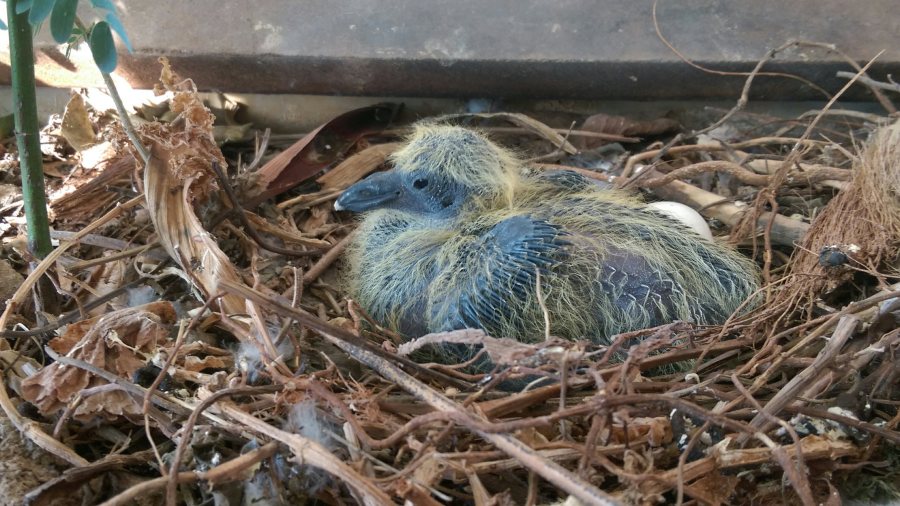 Long story short, it grew up and flew away. After that, whenever a pigeon laid eggs in my balcony, I threw them in the dustbin. Because my balcony was covered in pigeon poop for the 3 weeks that the family stayed. Apologies to all animal lovers, but I DON’T LIKE PIGEONS, especially if they live in my balcony.

Brinjals were planted by the gardener and thrived quite well for the first few months.

And I got a good yield from them as well. 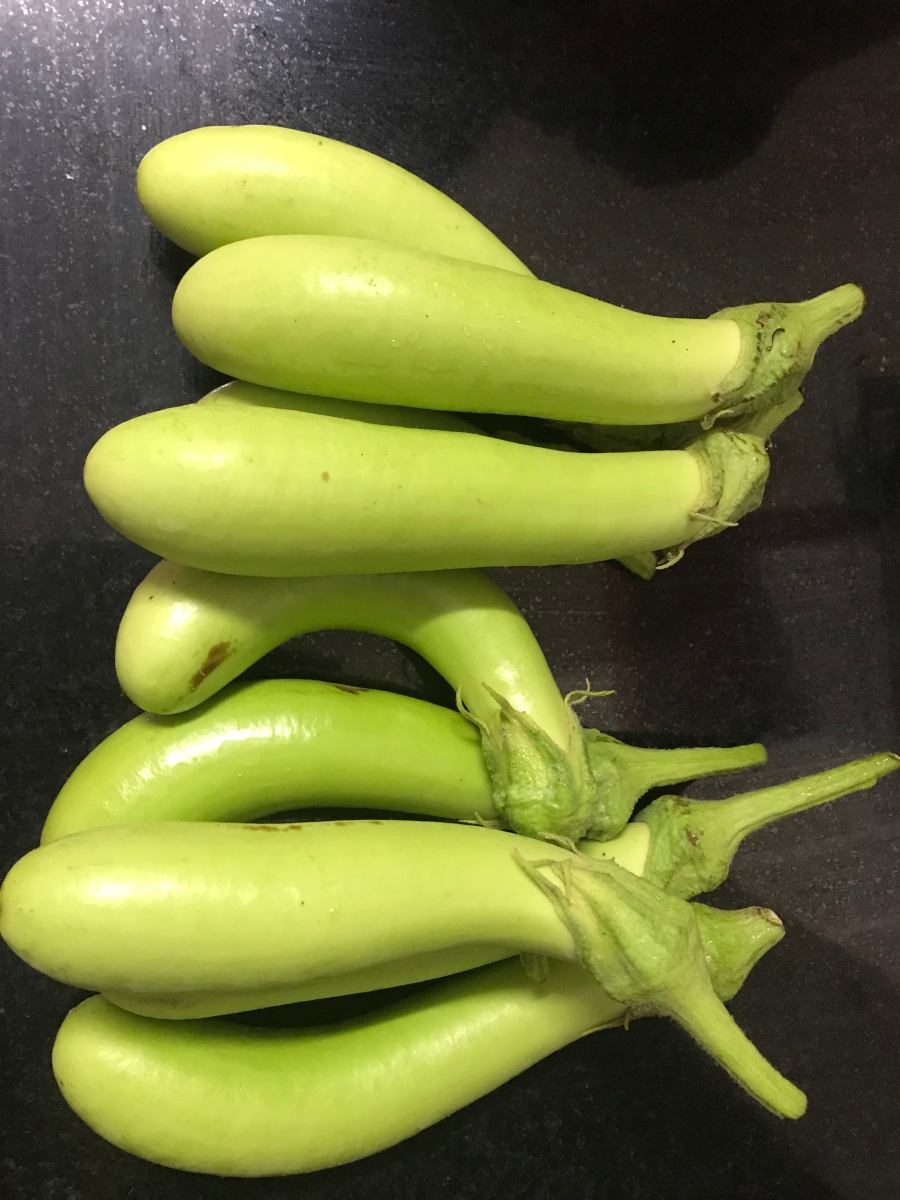 The special things is that there was a pleasant surprise awaiting me when I went for a 3-week vacation and came back. A tailor bird had made its tiny nest in one of the brinjal leaves. How lovely and delicate it looked with the leaf bent carefully and a nest stitched inside it!!

We were not able to lift the leaf and look inside for fear that we might scare away the birds. But we could get a glimpse of two little eggs inside. Daddy and mommy birds took turns brooding them, with a shift change in the morning and evening. After a while, the birds started leaving the nest unattended for longer time periods, and we kind of guessed that the eggs had hatched.

To the delight of my daughter, when we moved the leaf, two tiny beaks would open wide for food. The little birds stayed in the nest for the next for a couple of weeks and then disappeared. I hope to God that they flew away, and was not eaten by stray cats or eagles.

We miss the little birdies and hope they come back again to nest in our brinjal plants!

Green chilly was one of the plants that were planted right at the beginning and they grew well when the garden took shape.

The first yield of green chillies were so bountiful that I had to distribute them to all my neighbors. 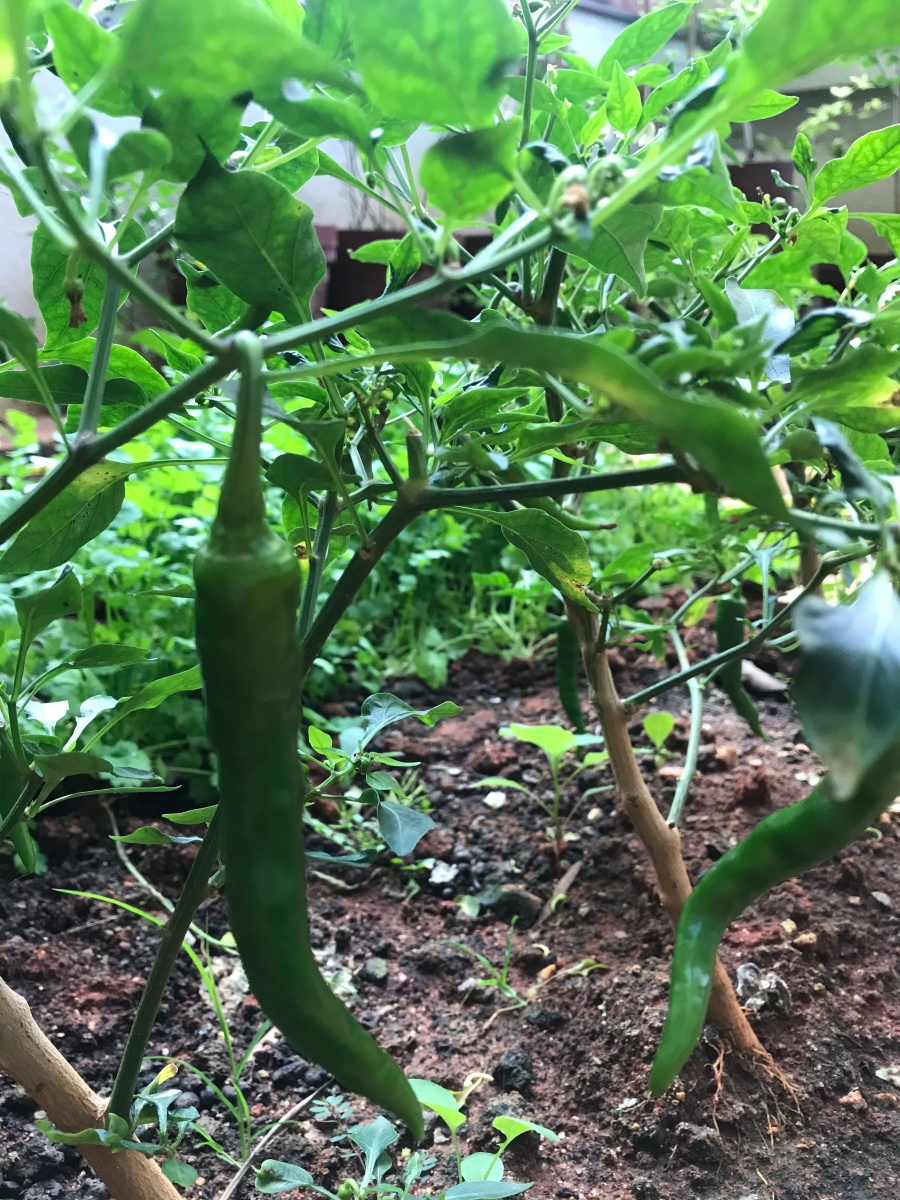 I have very low spice tolerance, and these chillies are perfect for me. Not too hot.

But after a while, the leaves of the chilly plants started curling. There was some bunching of buds on top, and the yield was almost nothing. I was wondering whether to pull them out, and sow seeds again. But then my maid advised me to prune them. She told me to pluck out just the leaves so that new ones will come in.

But after some research, I pruned them severely till there were just stumps left. And few weeks later, they grew back beautifully. So the moral of the story is “Prune chilly plants till they are mere stumps”. Chilly plants are relatively perennial in tropical climates. They will not survive harsh winters and snow, but in warmer climates, they can grow over multiple years.

We Indians love chilly, regardless of any health benefits they might have. But they actually have a few health benefits including lowering cholesterol and making your immune system better.

So go ahead. Grow some chillies!

This is a very very tricky thing to discuss. Everybody has their own philosophy on what can be used and what cannot. I am still very new to this field. So please don’t take the advice I give without testing it out for yourself.

The gardener gave me a product called

Mikboost – Produced by Milkens Bio, it is said to be an excellent plant grown booster derived from natural substances through fermentation process.(whatever that means)

Mikmine – This one is also produced by Milkens Bio, it is specifically for leaf miner. Leaf miner is this Picasso of a bug that makes pretty designs on leaves. Now I don’t mind designer leaves, but these affected leaves wither and die after a while. That’s not cool. And I wanted to get rid of them. Mikmine seems to help since I haven’t had much trouble with leaf miners after that.

I believe in good faith that these are organic pesticides and fertilizers since their website says so. But if you are very fussy about not using anything artificial, here are some things you can do.

Go ahead and try these little pretty flowers. They make your garden bright, and also keep away pests.

3. Banana peels – I was told by an awesome gardener neighbor that the water from banana peels soaked for a day can be used as pesticides. If you soak them for 3 days, you can dilute the water and use it as fertilizer. I’ve tried it once. They don’t stink. In fact, the vessel smells faintly like wine.

4. Neem cakes – Not tried,  though I have a small bag of neem cakes waiting. Will get to it soon and post the results here.

Green Essence was the final choice for setting up my garden because they were cheaper than the others. And also because the owner was very enthusiastic. But this is India. Nothing happens on time, nobody rendering services turn up on time. After a lot of waiting and following up and getting mad enough to pull my hair out, things started happening slowly… very very slowly.

There was this ONE sincere guy digging away, setting up a small water lilly pond in the center.

The pots started filling up.

The stepping stones were set in place. 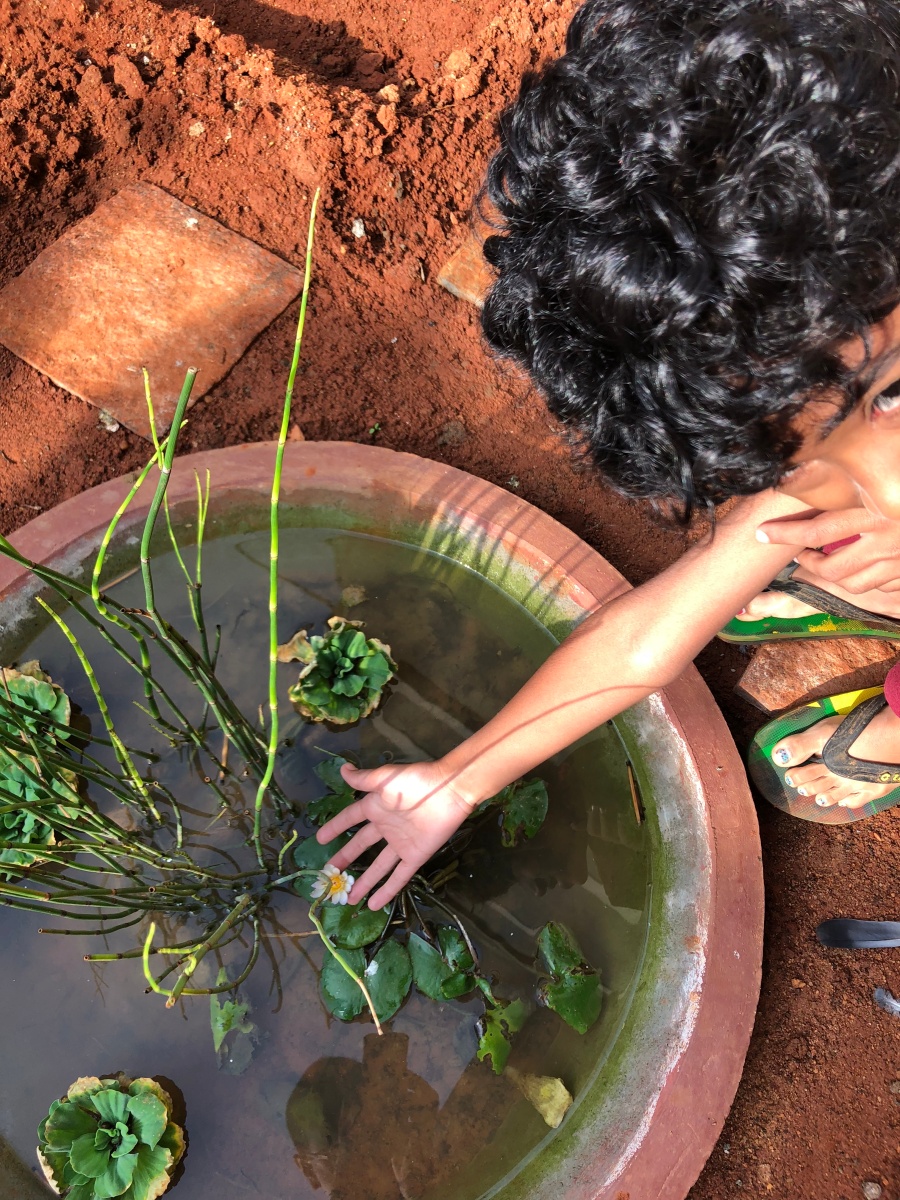 And voila! the little garden is ready….

The seedlings were green chillies, brinjal or eggplant and cabbages. There were seeds of bitter gourd, fenugreek, cucumber and bottle gourd. Now we just had to wait for them to grow.

There is one more small person, my 8-year-old daughter, Nina who loves the garden as much as I do, or even more. From the very first clean-up, weeding, breaking up cocopeat cakes, digging up, planting, pruning and what not, she has been by my side.

We didn’t need anybody to design the garden. I had a fairly clear idea what I wanted to do. I cannot post my design here; but here’s what Seby, my encouraging and creative husband made based on my explanation.

We needed somebody for initial set up. And I started researching for

It was easy to shortlist a few, but tougher to get them to actually come and have a look. Many didn’t pick up calls and many didn’t call back after my initial call. These are the three that I finally zeroed in on.

Xanadu Organic Gardens  – They gave me an initial quote of over 1.5 lakhs and that was enough for me to say no. They charge Rs.2000 for an initial visit. And then sent a fancy PDF proposal.

Mydreamgarden – I love these guys. They have a very nice terrace garden near Banaswadi. They promised to give materials, but no delivery and no setup. So that didn’t work either. 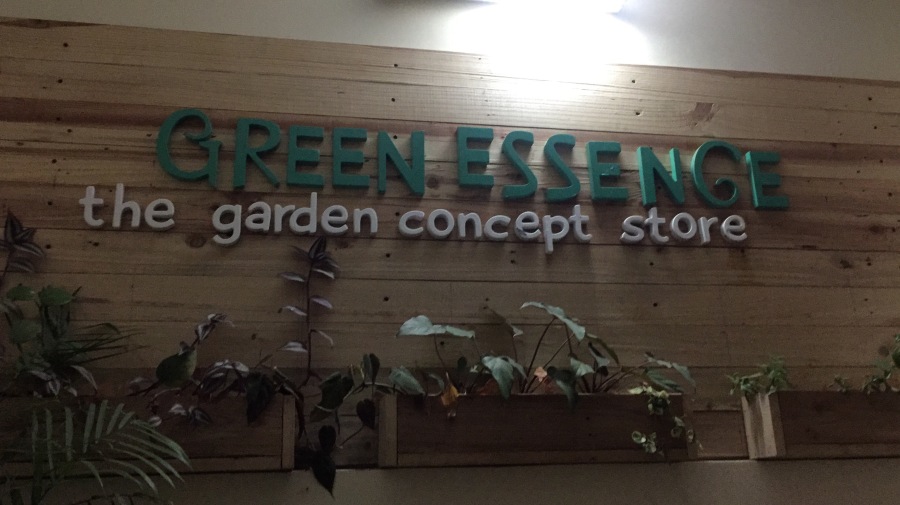 My daughter Nina has been with me from day one. So there’s another post dedicated to her. Nina and I initially thought that we could do it ourselves. But some digging up with rudimentary tools after watering the rock-hard mud, was enough to convince me that I had to get somebody specialized in terrace gardens.

The owner cleaned up the weeds before we moved in. And I started watering the garden profusely in an effort to soften the mud.

That’s Nina and I digging away. Well, I’m on the phone and she’s digging! 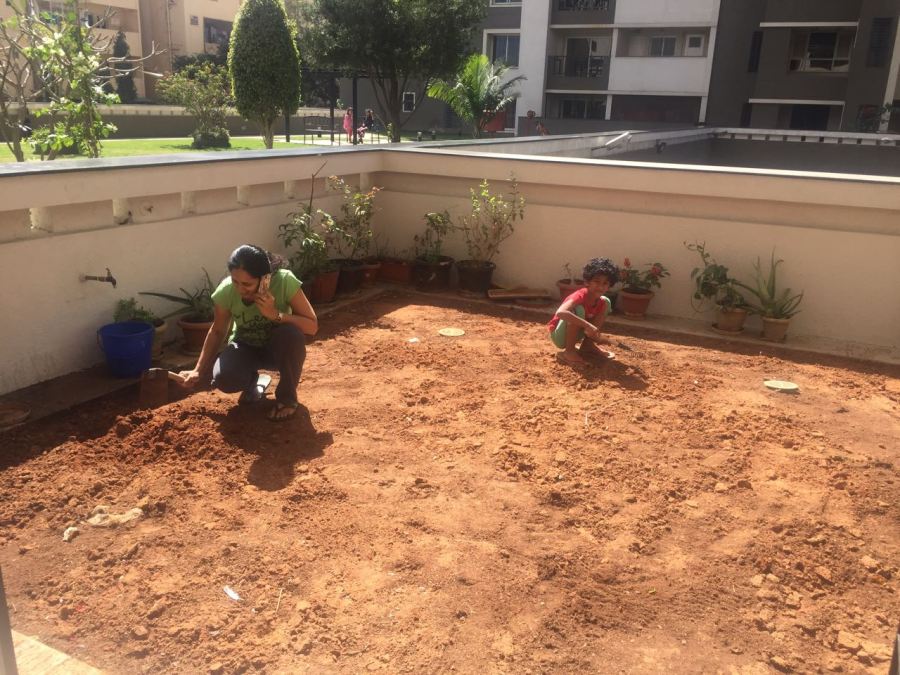